Home Premier League Arsenal ‘Not strange’ for Arsenal to have player ‘on agenda’ for summer –...
SHARE

Arsenal are one of the clubs to have Real Sociedad star Alexander Isak ‘on their agenda’ for this summer.

That’s according to Mundo Deportivo, who say the 21-year-old’s performance for Sweden against Spain at Euro 2020 ‘dazzles the world’.

Those in charge at the La Liga side were already aware the forward can perform well at the highest level, like he did against La Roja, and ‘half of the world’ were made aware of his qualities earlier this week.

Mundo add ‘it’s not strange’ the Gunners, Barcelona and AS Roma have the former Borussia Dortmund man on their transfer agenda.

La Real wanted to renew his contract and make him one of the top earners at the club before he went to the European championship. Imanol Alguacil’s side were also looking to slightly increase his release clause in the new deal. The current clause is set at €70m.

Real Sociedad paid €6.5m to the Bundesliga side to acquire the Swede’s services in 2019, 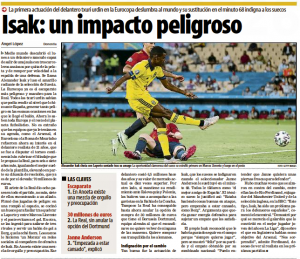 Arsenal, along with Barcelona and José Mourinho’s side, are in the picture to sign Isak.

If he continues to shine for Sweden at Euro 2020, Mundo state there’s a good possibility for Mikel Arteta’s side and other suitors to make their interest firm in signing the player.