Home Europe “Not a big club for me… City is artificial” – Digs and...
SHARE

Manchester City made it to their first Champions League final last season, overcoming Borussia Dortmund and Paris Saint-Germain in the last eight and semi-final respectively.

The Citizens failed to win Europe’s elite club competition as they lost to Chelsea in the final.

Pep Guardiola’s side have made it to the last 16 this season, after topping their group table, ahead of Paris Saint-Germain, RB Leipzig and Club Brugge. The Etihad club are one of the firm contenders to win the Champions League this campaign.

Paul Courant, former Club Brugge player and ‘top scout’ has given an interview to Belgian newspaper Het Laatste Nieuws, where he took a dig at the Premier League winners.

The 72-year-old talked about Guardiola’s side even when he was not quizzed about the English club. He was critical of City when asked about PSG’s chances of achieving success in Europe.

“Well… I was in Jan Breydel when Club [Brugge] played against Manchester City. You have to know: I have attended a lot of matches live in my life. Of big players and big clubs. In Europe and in South America,” Courant said.

“But I had never experienced the level that City reached that evening. You already saw it in the warm-up…” 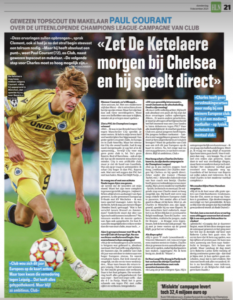 “While City is not a big club for me…. That’s not Bayern, Real or Barcelona – although they may be less so at the moment.

“City is an artificial club, but you can see the hand of Guardiola. So to answer your question: I rate City higher than PSG. Bayern too. That’s not to say PSG can’t make it. But it’s still Paris…”