Home Europe “It’s not a bench where coaches last long” – Gracia in another...
SHARE

All the Spanish media want a piece of new Watford manager Javi Gracia.

Another Spaniard managing in the Premier League is newsworthy on its own. Added to the victory over Chelsea, and that Antonio Conte’s men are soon to face Barcelona, and it’s a perfect excuse to get a few words with the Watford manager.

Thursday’s edition of AS had an interview with Gracia, and Friday’s copy of Marca follows on.

Marca’s first four questions were about Chelsea, and by the time Gracia was asked if Luis Enrique could replace Antonio Conte, the Watford boss sounded like he’d had enough: “Chelsea is past water for me, it’s not my concern. It will be that of Barcelona when they play against them. Mine is West Ham, Everton, West Brom… We know that we have 12 very intense matches and there are no big differences at the bottom.”

That knocked the Spanish newspaper from their Chelsea agenda, and so the next question was predictably about Gerard Deulofeu.

Asked if the former Barcelona player can regain his best form at Watford, Gracia explained: “I think so. First, for the good player he is. Second, because of the desire to be part of this project until the end of the season. In addition, he fits very well with this football.

“He is a great player and in these two games he has shown it. He arrived and the next day he was already playing against Stoke. He has made great performances with goals, assists and working defensively for the team. It is not easy to have such a good attitude and that immediate performance.”

Marca then asked a couple of questions about why Gracia moved to England and whether he’d have preferred a La Liga job, batting them both away without any issue, the Watford manager said it was the desire shown in recruiting him with made all the difference.

Gracia was candid and explained he’s not really had any concrete opportunities until Watford came along. 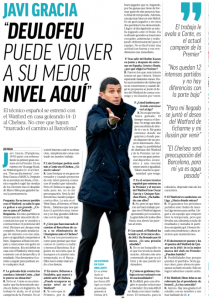 Warned Watford have gone through 10 managers since 2012, Gracia made it clear he knows the situation: “It’s not a bench where coaches last long. I face this challenge convinced that it will go well and that it can be durable.”

And, just like AS a day before them, Marca couldn’t help but ask about Elton John.

“At Watford, Elton John is a point of reference [he is the honorary president]. Have you met him?”

“Not yet. There is a stand at the stadium with his name and I have been told about him.”

Watford given warning over their ‘divine revelation’, and what may happen next.