Home Europe Nordin Amrabat reveals Watford have asked if he wants to return from...
SHARE

Nordin Amrabat was a used member of Watford’s squad before he left on loan for Leganes.

The move surprised some, but it seems Amrabat didn’t quite fit the plans of Marco Silva fully, and the 30 year old left several games into the season.

Going to Spain for the season suited the player well, giving him a chance to get what he’d hope would be more regular games and a fresh start away from Silva’s Watford.

It probably hasn’t worked out exactly how the Moroccan international envisaged, because he’s splitting his time between starts and substitute appearances and rarely plays 90 minutes for the Spanish club.

Speaking to AS, Amrabat was asked if he’s happy at Leganes, and replied: “Yes! It’s normal that I didn’t have many opportunities because the coach told me he changes a lot. For me it would be better to play 4-5 games in a row. But that way everyone is happy. It’s your style. I respect it. We are doing well.”

Asked if Watford have made any attempts to get him back in the January window, 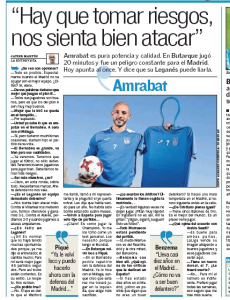 Amrabat said: “It’s true that Watford called me, called my representative and asked if I wanted to return. I told them I had come for a year. It wouldn’t have been nice to be here for only four months.”

Perhaps Amrabat’s Watford exit was very much a managerial thing if he’s been asked to return as Marco Silva has been leaving the club, although it’s not stated exactly when the call was made.