Home Europe ‘Nobody wants to contemplate it’ – Madrid fitness news ahead of Liverpool...
SHARE

Real Madrid will play their third consecutive Champions League final later this May, facing Liverpool at Olimpiyskiy National Sports Complex in Kiev on 26 May.

The Spanish club have won the last two finals and are favourites to win it for the third year in a row. Cristiano Ronaldo remains vital in helping Zinedine Zidane’s side win the Europe’s elite club competition in Ukraine.

But Ronaldo suffered an injury in the 2-2 draw against Barcelona in the El Clasico. Picking up an ankle injury while scoring Madrid’s first equaliser, he was replaced by Marco Asensio in the second-half.

According to Mundo Deportivo, a club source has told them “nobody at Real wants to contemplate” they will play the Champions League final without Ronaldo in the squad.

Madrid travel to the Ramón Sánchez Pizjuán Stadium to face Sevilla on Wednesday, and Mundo Deportivo say the former Manchester United star won’t travel with the squad and will also miss the next clash against Celta Vigo at home.

The 12-time European champions’ last league tie will be against Villarreal at Estadio de la Cerámica on 19th May, one week before the European final. Real Madrid have already ruled out Ronaldo featuring against Sevilla and Celta, but will be hoping he could get some minutes when they face Villarreal. 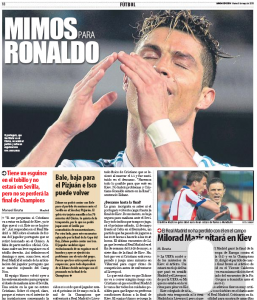 Zidane had labelled Ronaldo’s latest injury as “small thing” and insists that he isn’t worried about the forward regaining full fitness for the final.

“Right now he’s not great but it’s a small thing, just a movement. Tomorrow we’ll have a look at a scan and see what we’ll do. I’m not worried about him for the Champions League final,” Zidane said after his side’s draw against Barcelona.