Manchester United were successful in convincing Edinson Cavani to continue at Old Trafford and with the striker’s future secured, they can focus on bolstering their attack by bringing in a new right winger.

Jadon Sancho continues to be a target for the Red Devils and their interest in signing the Borussia Dortmund star has been pushed by the German press this week.

Two days ago, Bild reported the winger is keen on returning to England in the summer, despite having a contract until 2023. United were named as the suitor.

On Tuesday, the same outlet explained Ole Gunnar Solskjaer’s side are keen on signing the 21-year-old and are ‘ready to pay’ over €90m for his signature.

The English club wanted to take Sancho last summer, but they decided not to meet the deadline and the €120m price set by BVB to sanction his sale. Dortmund officials have confirmed there’s an agreement to allow Sancho leave in the next market, if certain conditions are met.

BVB CEO Hans-Joachim Watzke has now used Manchester United’s failure to sign Sancho in 2020 as an example to warn suitors interested to take Erling Haaland in the summer.

When SportBild asked how many clubs can afford the Norwegian, Watzke said: “Your 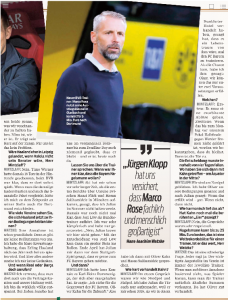 assumption is fundamentally wrong: Because there are no conditions from us.

“I have the clear expectation Erling Haaland will still play for us next season. And I don’t worry about anything else.

“I suspect they [Real Madrid and Barcelona] also know about the contractual situation and our attitude. I’m really completely relaxed here. With Jadon Sancho, nobody believed us until deadline day last summer that he would stay – and he is still here today.”