With just 12 months left on his contract at Barcelona, Sergi Roberto has been linked with a move away from the Camp Nou.

Manchester City showed interest in the 29-year-old last summer, but he wasn’t in favour of leaving the Catalan club.

On June 1st, Sport explained City still have an interest in the player, and Pep Guardiola is a fan of the Spain international’s profile and professionalism.

It was also explained the two clubs have started contacts, and Roberto, who can operate as a fullback and a midfielder, is ‘seduced’ by the idea of playing for the Citizens.

Wednesday’s edition of Mundo Deportivo explains the Barca man is ‘calm’ and ‘oblivious’ to what’s said about his future by the media.

The newspaper then takes a look at the recent claims linking him to the Premier League winners.

From Roberto’s surroundings, they ‘assure’ there has been ‘no contact or any interest’ from Guardiola’s side. Both the Barcelona player and the Etihad club’s manager share the same agent. 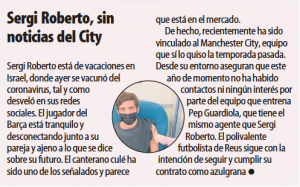 As per the report, Roberto’s intention is to continue at the Camp Nou and fulfil his contract at Barcelona. This report should at least calm down recent reports linking him to Manchester City.