Mikel Merino is currently away with Spain’s U21 selection and has been speaking to the Spanish media. Nothing too alarming came from the player’s words, but a snippet in Friday’s edition of AS is something for Newcastle United fans to worry about.

They can’t really, only being allowed to recruit Basque players, Athletic have a very limited pool they can sign from, which means footballers such as Arsenal’s Nacho Monreal and Newcastle United’s Mikel Merino will be targets for most of their careers.

AS seem to believe a transfer is possible. It’s explained Rafael Benitez put his foot down in the January window and refused a sale, but things will be different come the summer. 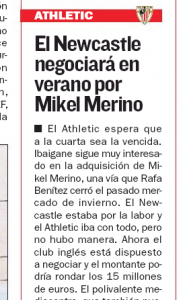 Newcastle are ‘willing to negotiate’ the sale of Merino and AS feel the price will be somewhere around the €15m mark. That’s seems too cheap, Merino has a contract lasting until 2022, which on its own would suggest a higher fee.

That Athletic could rely on Merino to be able to play midfield or central defence over the long term would be very useful for them, also pushing the price.

And they certainly have the funds.

None of this would go down too well with Newcastle United fans, who want the squad adding to.