The Brazilian arrived in Europe when FC Porto took him from Grêmio in 2021. He mainly operated as a left wing-back, but has been used on both the left and right wing in his first season with the Dragons.

Pepê finished the campaign with six goals and six assists in all competitions. The 25-year-old’s performances have caught the Magpies’ attention.

Correio da Manhã on Saturday explain Newcastle United are interested in signing him and plan to make a ‘firm proposal’ soon.

Although the report states the Tyneside club ‘will make an offer’ for the versatile player in the ‘coming days’, they make it clear the fee Newcastle are willing to propose to Porto is not known.

The Primeira Liga side, for their part, will have to pay 12.5% of any fee earned to Grêmio.

Pepê’s contract expires in 2026, with a €70m release clause. His market value is set 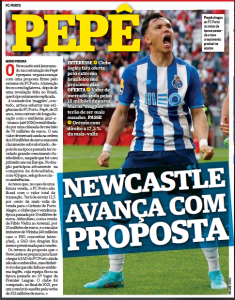 at €18m, but the report suggests he is undervalued,  after excelling in his debut season in Europe.

Having cashed in €35m from Fábio Vieira’s transfer to Arsenal and an additional €40m income from Vitinha’s impending sale to Paris Saint-Germain, Porto have no need to sell Pepê, if there is no convincing offer.

Correio da Manhã state ‘money is not lacking’ for Newcastle to complete Pepê’s signing this summer. It needs to be seen whether Howe’s side can make an offer that ends up convincing Porto.