Since the takeover at Newcastle United, they’ve been linked to players which may have otherwise been out of reach.

This is today the case with a story from Portuguese newspaper Record, who update the list of sides who are interested in signing of Benfica striker Darwin Nunez.

With his agent telling the Italian media that he’s been getting approaches for the transfer, the outlet managed to go after the information and bring some potential destinations for the 22-year-old.

Darwin has been linked to several clubs since the start of the season, especially after he scored a brace against Barcelona in the Champions League. Today, Record names AC Milan, Inter Milan, Juventus, Manchester City, Atletico Madrid and Barça as clubs who want him.

And now, there’s also Newcastle United included. The newspaper claims the Magpies have been ‘tightening the siege’ for the striker. 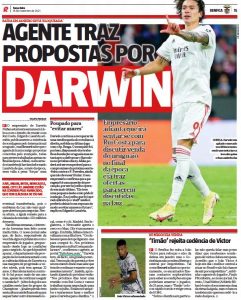 Record’s information is that Benfica will not sell Darwin in the middle of the season, and already told his agent that forcing a transfer won’t work. In case any clubs come for him now, then they’ll demand the price of his release clause, which is €150m.

That’s why his representative Edgardo Lasalvia is said to be gathering offers for the end of the season. He told the Italian media that only at that time will he meet Eagles president Luis Filipe Vieira and discuss the bids.

When covering the same news, newspaper A Bola writes that Benfica’s intention is to sell Darwin for ‘a record amount’. The striker has eight goals and two assists in 13 appearances for the cub this season.