Barcelona’s Samuel Umtiti has emerged as a transfer target for Newcastle United.

Mundo Deportivo explain the Magpies are one of the defender’s suitors and they are ‘still lurking’ for him.

Earlier this week, the La Liga side announced they’ve extended the 28-year-old’s contract until 2026 and this was done to help them lower his wages, which was needed to register new signing, Ferran Torres.

The newspaper explains the centre-back is not included in Xavi Hernández’s plans at the Camp Nou. Despite the new deal, the Frenchman is one of the players who can leave the Catalan club in the winter market so that they can further reduce the salary budget.

Newcastle, who were purchase by Saudi Arabia’s Public Investment Fund in October, want to make large investments this month. 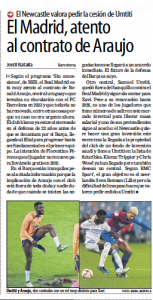 Eddie Howe’s side have already sealed deals for Kieran Trippier and Chris Wood, and still want to bring in a new centre-back.

Lille’s Sven Botman was the main target for the Premier League side.

However, RMC Sport, via Mundo, explain the difficulty to take the Dutchman has seen the Tyneside club consider ‘asking’ for Umtiti on loan in January.