Newcastle United have promised to make a second bid for Sporting youngster Matheus Nunes after seeing their efforts to sign him in January rejected.

That’s according to O Jogo, who say the Magpies bid to sign the youngster was slightly lower than reported last month.

We covered several reports from Portugal at the end of January that stated Newcastle were keen on Nunes, who has broken through and impressed for Sporting this year.

The initial report claimed they had made an offer to sign the 22-year-old on loan until the end of the season, with that deal including a purchase option set at £10m.

It was later revealed their offer was actually €13m, which was rejected because Sporting value him highly and he has a €60m release clause in his contract anyway.

O Jogo now pick up on the story again and say the actual bid from Newcastle in January was £10m, so slightly lower than the €13m reported earlier.

This was in the form of a loan bid, as previously reported, and included a purchase option set at £10m, so €11.4m when converted. 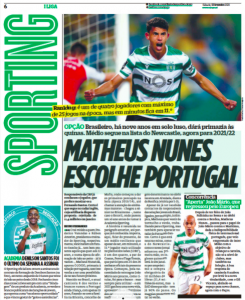 This was rejected by Sporting, who flat out ‘said no’ to the deal. Undeterred, however, Newcastle ‘promise to return in the summer’ according to the newspaper.

In what form that will be isn’t mentioned, although another attempt at a loan with an option to buy is likely to be as swiftly rejected as the first.

Indeed, so would any transfer offer if this report is to be believed, with Sporting very much not interested in selling.