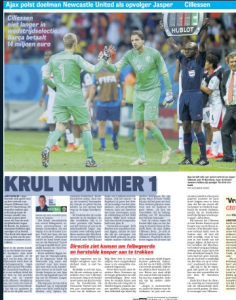 Tim Krul is facing an uncertain future at Newcastle United this summer after returning from a cruciate knee-ligament injury.

The Dutch goalkeeper has been out through injury for 10 months, and with one year left on his contract he could be leaving.

Newcastle have five goalkeepers in their squad, and Rafael Benitez recently admitted Krul could be allowed to leave if clubs are interested in him.

According to De Telegraaf on Saturday, Ajax are interested in signing the 28-year-old this summer.

Ajax’s Jasper Cillessen is set to leave the club for Barcelona, and the Eredivisie club are looking for a replacement.

De Telegraaf say Krul is Ajax’s first choice option, but financial terms of the deal could be a problem.

Newcastle reportedly want €5m for Krul, and his wages are also likely to be an issue. Ajax want to permanently sign the player, but might try to sign him on loan.

However, it’s difficult to understand why the Magpies would be interested in sending him on a loan with just one year left on his contract.