Ousmane Dembélé’s current deal at Barcelona expires in 2022 and contract situation is being discussed on a day-to-day basis in the Catalan press.

Last week, Mundo Deportivo reported that Newcastle United appeared to be in pole position to sign the winger after offering an ‘astronomical proposal’ to him.

It was said the Magpies are offering the 24-year-old an annual salary of €15m plus a signing on bonus of €15m.

The La Liga side have less than a month to stop the France international from being able to freely negotiate with other clubs, with a view to join them next summer.

In order to avoid such a scenario, Barca have ‘conveyed to the forward’ he has two weeks to make a decision on his future. 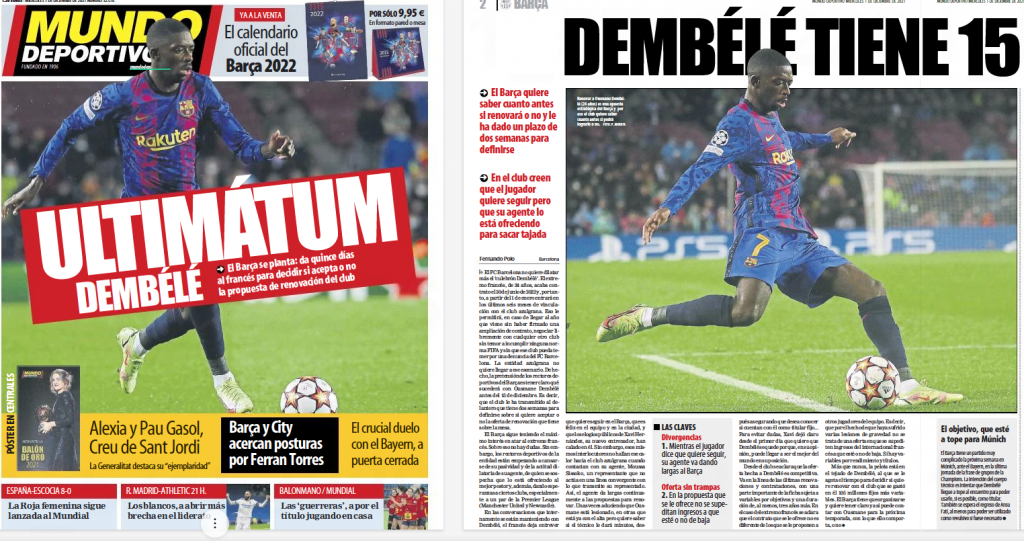 That’s according to today’s Mundo Deportivo, who say Xavi’s side want his situation resolved before December 15th; in other words, they have now issued an ‘ultimatum’ to the attacker.

‘There is no doubt’ about the Camp Nou side’s desire to tie down the player to a new deal.

Barca sporting leaders, however, are getting tired with the ex-Borussia Dortmund man’s ‘passivity’ and the agent’s ‘delaying attitude’. They even suspect Dembélé’s representative has offered his client to the ‘highest bidder’.

His delay in accepting the renewal proposal is ‘giving hope to certain clubs’, ‘especially’ Newcastle and Manchester United. Xavi Hernández’s side want to know whether they can count on Dembélé next season or if they have start making other plans.

Mundo say the ‘ball is in Dembélé’s court’ and he is now ‘running out of time’. The agent’s stance is giving Newcastle hope to sign the wideman on a free transfer next summer.