With under a week left in the transfer window, Newcastle United still have a lot of work to do if they are to strengthen their squad further.

Having already brought in Kieran Trippier and Chris Wood from Atlético Madrid and Burnley respectively, the Magpies seemingly need at least another centre-back and another striker, if the rumours are to be believed.

On top of that, there has been talk of them being interested in an attacking midfielder, with Antonin Barak, currently at Hellas Verona, being targeted.

There have been a few articles dotted here and there about Newcastle wanting the Czech Republic international, and this continued on Monday, when L’Arena, a local newspaper, brought the Magpies up again. 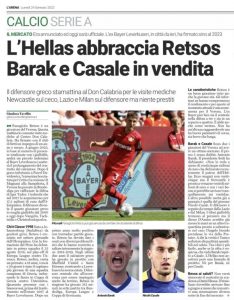 Verona, through their president, Maurizio Setti, made it clear they wouldn’t sell for less than €25m, and that’s a figure the Premier League side could get close to.

L’Arena report that while it may not be €25m, ‘Newcastle are ready to spend €20m and, with various bonuses, can easily reach €22m’.

We’ll have to see what comes of this, but if Eddie Howe wants Barak, it’s a fee that could (probably) easily be spent between now and January 31st.