Even with the signing of Chris Wood, Newcastle aren’t done going after strikers in January.

That’s because they know they are going to need goals if they are to stay up, as their defence remains relatively leaky to this day.

The New Zealand international should help in that department, but other names are still being looked at, and Gazzetta dello Sport believe they know their two man shortlist: either Darwin Nuñez from Benfica or Duván Zapata from Atalanta.

The Italian newspaper explain that ‘one of the two must be in St James Park by February according to the idea of the PIF Fund’, but the Portuguese side have ‘raised a wall’ around the Uruguayan to date.

That leaves the Colombian, who has ‘always dreamed’ of playing in the Premier League one day, being an ‘Arsenal fan since he was a child’. 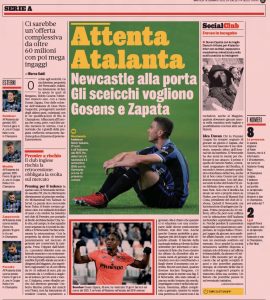 That’s why ‘Newcastle are now planning to push for Zapata’, with a ‘first proposal of €30m’ in mind, described as a ‘figure that does not coincide with Atalanta’s assessment of the striker, especially in January’.

The Serie A side, very understandably, do not want to lose their star striker midway through the campaign, knowing full well they would need to find a replacement almost immediately, which is why they ‘would be willing to negotiate only in the face of an unmissable offer, worth at least €45m’.

That’s described as a ‘monster figure for a player who will turn 31 in April’, which could certainly make him ‘aspire to the contract of his lifetime (€6m/year) for the last part of his career’.

Should that be put in front of him, it could certainly. weigh in a possible negotiation’.