Newcastle United are making ‘noise’ around Sporting Club de Portugal centre-back Gonçalo Inácio, but the Portuguese side are refusing to sell.

That’s according to Record, who say Newcastle ‘insist’ on a move for Inácio this summer, but Sporting are not interested in letting the 20-year-old go.

The newspaper reports that the Magpies are intent on ‘grabbing’ the central defender as they continue their rebuild under Eddie Howe this summer.

Sporting coach Rúben Amorim doesn’t want to lose the player, though, and has made those in charge of the club aware that he considers him ‘indispensable’.

He wants them to make Newcastle aware that Inácio is a ‘non-negotiable asset’ and has even ‘communicated’ this to the Magpies as well.

There is, however, a caveat to that, as he would be willing to sit at the table and negotiate a deal starting at €35m, which is €10m less than the release clause in the defender’s current contract. 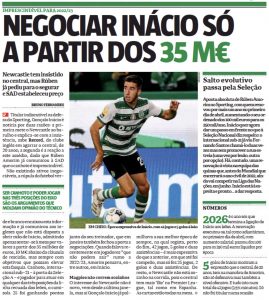 Those negotiations would have to include goals to raise the figure and likely take it towards that €45m figure.

Newcastle are keen on the defender because he is left-footed and comfortable playing in a back three as well as at full-back if need be.

They tried to do a deal in January, but Sporting closed the door to negotiations and don’t seem to be all that keen on opening it for the summer either.

They are not alone in the race, though, as they are other suitors in the Premier League as well as in Spain, with the cards ‘all on the table’ according to Record’s information.