Newcastle United could revive their interest in Bayer Leverkusen’s Mitchel Bakker in the summer after making moves for him in the January transfer window.

That’s according to SportBILD, who say it is likely that the Dutchman will be leaving the German club at the end of the season.

Newcastle were linked with Bakker throughout the January transfer window as they planned their rebuild under Eddie Howe that month.

Their interest in the Dutchman came late in the window, with it stated on the 24th that they were one step away from completing a €20m deal.

That was followed by a claim his agent had travelled to the North East to hold talks with those in charge at St James Park and that the defender had been ‘informed’ of the interest in him.

A deal never happened then, but at the end of the month, it was stated it was ‘more than likely’ the player would end up in the Premier League. 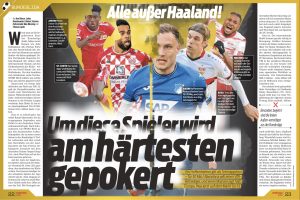 SportBILD back up that idea, stating that it ‘looks like’ Bakker will move on to a new country and a ‘new sheikh’, having previously been a player at Paris Saint Germain.

They say that Newcastle were ‘already on him’ in January and offered Bayer a transfer fee of €20m, but that deal fell through at the last minute.

They signed Matt Targett on loan from Aston Villa, but ‘contact’ with Bakker and his management is ongoing, and they ‘want to make a new offer’.

Whether that will be the same price as they did in January remains to be seen, but it appears the interest remains as the Magpies eye up a summer splurge.