Home Europe Newcastle have ‘made it clear’ they will ‘arrive at a significant sum’...
SHARE

Newcastle United have ‘made it clear’ they would be willing to make another effort to sign Victor Osimhen after showing interest in January.

That’s according to Gazzetta Dello Sport, who say the striker is unconvinced about a potential move to St James Park.

The newspaper explains that they ‘came forward’ in the January transfer window but couldn’t strike a deal at that point, with Napoli not interested in selling.

Their interest has not gone away, though, and they have ‘made it clear’ they would be ‘willing to try again’ this summer.

Indeed, they would even be willing to ‘arrive at a significant sum’ in negotiations to get the striker, but the player simply isn’t interested in the switch.

He does not want to listen to the ‘sirens’ being sounded by the Magpies, a stance he has also adopted for interest from Arsenal because he wants to play in the Champions League. 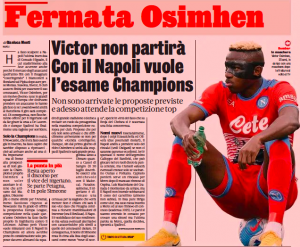 Neither Newcastle nor Arsenal, who do have Europa League football to offer, can provide that, so he would prefer to stay in Naples and test himself with them in UEFA’s top competition instead.

He would have only considered ‘really attractive proposals’ from clubs with great traditions who will compete at the top of the pile in Europe, and they simply haven’t shown an interest.

Even the money on offer from Newcastle isn’t enough to tempt him, and it seems Eddie Howe and co will have to look to spend it elsewhere to improve their forward line.