Loaned to Sevilla for the whole of last season, Maxime Gonalons returned to AS Roma in June without much hope of playing regular football in Serie A.

The 30-year-old has a lot of competition in midfield, and with the new addition of Amadou Diawara, there’s even more now than when he left.

That’s why a move elsewhere, two years before the end of his contract, could be what’s best for the defensive midfielder, and Newcastle United are reportedly after him.

According to Il Tempo on Tuesday, Gonalons has attracted the attention of the Magpies, who are expected to announce Steve Bruce (or Bruno Genesio) as their manager over the next few days (hours?). 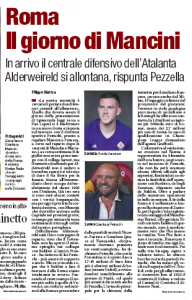 Yet to sign a player following Rafa Benitez’s departure, Newcastle have, however, sold a few, meaning there is some money to be spent somewhere.

The club need to replace Mohamed Diamé somehow, and while the two aren’t exactly like for like (the Frenchman is more defensive), Gonalons would certainly bring some experience with him without costing too much.

Considering Roma only spent £4.5m on him two years ago and he isn’t wanted anymore, a similar fee would do the trick.

It’s a deal that might just tick Mike Ashley’s boxes, and we all know that, perhaps unfortunately, goes a long way these days.