Spending last season on loan at Everton, Djibril Sidibé got a taste of Premier League football.

He enjoyed himself, and many thought that could lead to a permanent transfer either at Goodison Park or elsewhere in England, but, in the end, he stayed at AS Monaco, where he has dipped in and out of the starting XI.

His six starts have led to speculation he could leave in January, with Newcastle United and Crystal Palace touted as potential destinations, but France Football pour cold water all over that.

The French magazine went out of their way in their weekly print edition to explain that, stating that ‘despite a few touches’ with the Eagles and the Magpies, ‘he should stay at Monaco during this transfer window’.

That means both Steve Bruce and Roy Hodgson will need to look elsewhere to bolster their right-back spot, although it isn’t said whether this decision to remain in the principality is Sidibé’s. 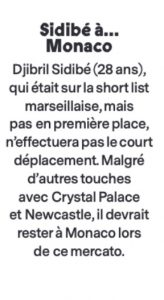 The defender has started the last two games under Niko Kovac, one at left-back and the other down the right, helping them win both in the process.

Perhaps his versatility is a bit too precious for Monaco right now, which is probably the attribute Newcastle and Crystal Palace were so keen on.