Newcastle United continue to get linked with big name players ever since Saudi Arabia’s Public Investment Fund confirmed the purchase of the Premier League side earlier this month.

The Magpies are dragged into the mix in the race for Fiorentina’s Dušan Vlahović, as the striker has a contract expiring in 2023 and his decision to not renew, which was made public by the Serie A side, has caught attention of top European clubs.

Local newspaper to La Nazione now discuss whether it’s best for La Viola to cut ties with the 21-year-old in the winter market or wait until next summer. Either way, it’s believed a fee of €70m would be needed to take him away from the Italian club.

When discussing the Serbia international’s suitors from the Premier League, the Tyneside club are tagged, along with Liverpool, Manchester City and Tottenham Hotspur. 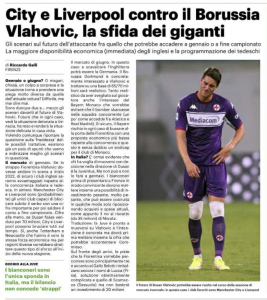 Regarding Newcastle, it’s explained they have the ‘economic strength’ to pay around €70m to sign Vlahović.

However, due to various reasons [not specified], the English club would prefer to delay any effort to sign him ‘at the start of next season’, meaning the summer.

This falls in line with previous claims that Newcastle will do their rebuild slowly and logically, rather than just splashing the cash immediately.