Toby Alderweireld is the Tottenham defender getting the most transfer attention this summer. A move was continually up talked before the World Cup and has carried on the same way since.

The Belgian media have repeatedly linked him with PSG but the French club’s own local media haven’t really been pushing that idea, it sounds like it may have come from the player’s camp.

In fact, over in Paris they have their eye on another Tottenham defender. No, not Danny Rose, but Jan Vertonghen.

Le Parisien report that new manager Thomas Tuchel hasn’t ‘abandoned the track’ of pursuing a transfer for the defender, and there’s said to be appreciation of his qualities.

It’s explained that PSG were also interested last summer, and the arrival of Tuchel hasn’t changed the situation. 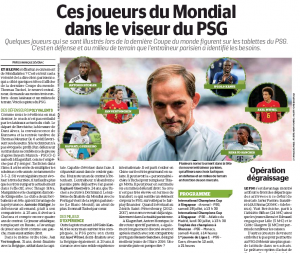 With Vertonghen having less than a year left on his Spurs deal, there’ll be a certain confidence in France that this isn’t an impossible deal.

Should the Belgian be interested then it’s down to Spurs to place a value on the 31 year old.

It’s likely that value would be higher than PSG expect. Mauricio Pochettino certainly isn’t going to want to lose both Vertonghen and Alderweireld in the same transfer window.

Spurs have been planning for the future of their central defence, but seeing the two go now seems to be a change too far this summer. Pochettino will fight to keep at least one.