For the past few days, the English media has been packed full with claims regarding Erik ten Hag and Manchester United.

Despite that, there hasn’t been an awful lot coming from the Netherlands. That looks to have now changed, with Dutch newspaper AD bringing a big report on the situation.

This is interesting from a Manchester United perspective, because it gives the view of what Ten Haag’s camp are currently thinking, and how they see things going in the coming weeks.

AD have the manager on the front page of their sport section, with a headline saying: ‘Hope for Ten Hag, perilous for Ajax’.

Inside, AD state: ‘Ten Hag is flattered, but does not stare blindly at Manchester United. It is stated from the trainer’s camp that the first conversation with the Mancunians went well 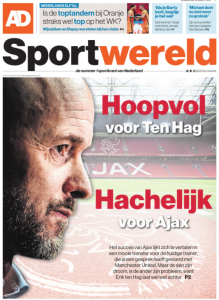 on Monday, but that he has been polled and approached by several clubs in recent months, of which the English giant is potentially the largest. The coach has not completely ruled out a longer stay at Ajax either.’

The first talks took place on Monday, yet AD say Manchester United are not yet prepared to make Ten Hag their favourite. Talks are ‘still too premature for that’, and the Red Devils also have other options.

Talks are expected with other candidates soon, with Mauricio Pochettino, Luis Enrique and Julen Lopetegui named. That may well not be AD’s own information, and the same goes for them saying Thomas Tuchel’s situation is being watched closely.

Ten Hag himself is said to be ‘picky’ when it comes to planning his career, and the ‘conditions to perform’ are crucial for him. 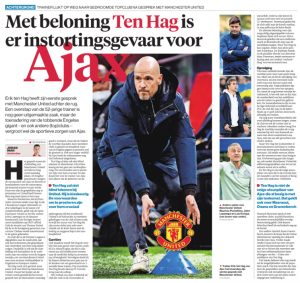 AD then add: ‘And then it’s not just about the potential of the player group for the Ajax trainer. At the faltering United, the hierarchy in several parts of the club has been lost for years, while the success of Ten Hag at his first clubs also arose from the close connections with the leadership and control in the purchase policy.’

Manchester United will likely look to come to a decision quickly, and if they choose Ten Hag then they may have some convincing to do themselves.