Barcelona and Deco can largely do whatever they want right now regarding Raphinha, but if they don’t present an acceptable offer to Leeds United then it means little.

Earlier on today, we covered claims from Catalan newspaper Sport, which stated the player and his agent met in Ibiza and decided to wait a little longer for Barca.

Arsenal offers were covered, as was a desire to get Leeds to reduce their asking price.

Marca also cover the situation, and they drag Chelsea into the picture quite strongly, putting the Blues on an equal footing with Arsenal. Both London clubs are said to have presented proposals in ‘the last few hours’, which Leeds are evaluating.

Meanwhile, Marca also claim Raphinha, or more likely Deco, is ‘in negotiations with Leeds’ to reduce the asking price. The Spanish newspaper put that at €50m, which seems a little on the cheap side. 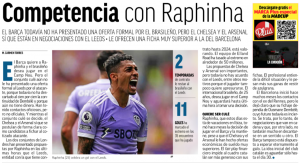 The Brazilian wants to play for Barcelona, and will wait ‘until the last minute’ before deciding on his future. Leeds hold all the power and there’s little reason for them to give a discount to Barca unless it gets them something else in return.

Raphinha can hardly agitate too much, given he needs to impress in the coming months to make sure he’s in Brazil’s World Cup squad.