Sevilla and Juventus have been named as Anthony Martial’s suitors ever since his agent publicly stated his client wanted to leave Manchester United in the winter market.

On January 24th, Spanish journalist José Manuel García reported there has been ‘daily contact’ between the forward and the La Liga side’s sporting director, Monchi. He stressed the 26-year-old only wants to join Sevilla and has communicated the same to United.

Since then, ESPN reported Julen Lopetegui’s side are growing confident of getting the deal over the line for the France international. These claims are relayed in today’s edition of ABC Sevilla, who then share their own information on this case.

Sevilla almost gave up the option to sign Martial, but after weeks of negotiations, there seems to be progress made. The former AS Monaco man’s ‘attitude’ has been ‘key’ as he was ‘faithful to the idea’ of joining the La Liga side from the beginning.

Martial had four offers from top clubs [two from Italy, one from France and England], but told his agent he only wants to leave Old Trafford this month to join Lopetegui’s side. Juve tried to sign him, but they were unable to convince the player. 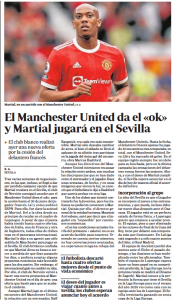 For this reason, the Andalusian club made a ‘new proposal’ yesterday and the Red Devils have given their ‘OK’ for his transfer. This allows Martial’s wish to be fulfilled and the report states Sevilla hope to officially announce the transfer later today.

Lopetegui remains hopeful the attacker can join training on Thursday and make his debut against Osasuna on February 5th.

Meanwhile, Calciomercato say the option for Martial to join the Serie A side ‘fades’ as ‘he goes to Sevilla’. The Frenchman will join them on a loan deal until the end of the season. Juventus followed him, but found the demands made by United ‘excessive’.

Over at TuttoMercatoWeb, they explain Martial ‘always put the Andalusian club on top of his wish list’ because Monchi promised him a leading role. However, finding an agreement with the Premier League side was a ‘big obstacle’, who wanted Sevilla to pay his full wages.

Martial’s ‘will’ to join Sevilla has been decisive and there is now ‘total agreement’ between the two parties. TMW even add that three parties have ‘defined a verbal agreement’.

Unless there’s a new twist, the attacker will travel to Spain on Tuesday to secure his transfer and hopes to train with his new club from Thursday.

The Italian website adds Sevilla will pay part of Martial’s salary during his temporary stay and offer a ‘lower amount’ than initially requested by United for the ‘onerous loan’.

From France, RMC Sport journalist Loïc Tanzi took to Twitter to report Sevilla have always been Martial’s priority this month and he was the Spanish club’s main target this month.

The United player is set to join Los Nervionenses on loan, and ‘signatures today’ are expected.