Antoine Griezmann is the subject of daily transfer articles in the Spanish media at the moment, so now L’Equipe have jumped in on the act.

The French newspaper have a big feature in their Wednesday edition, looking at Griezmann’s difficult situation and what can be done about it.

Once again, the player’s summer flirting with Manchester United is stated as a reason for Atletico fans turning against him. L’Equipe say someone in charge at Atletico told them in the summer it felt like a ‘crude’ effort to get a salary increase.

L’Equipe present Barcelona, Real Madrid and Manchester United as possible destinations, and it’s of course the latter which sounds the most convincing. 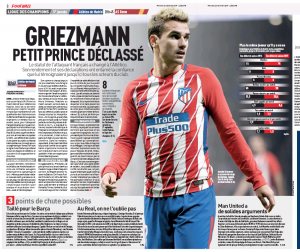 The Premier League club also have the ‘strong arguments’ of Paul Pogba, a friend of his fellow French international, and allowing Griezmann to follow in the footsteps of his idol David Beckham.

Griezmann could take the place of Henrikh Mkhitaryan, suggest L’Equipe, and play behind a striker, a role he’s taken up for France often enough.