With Christian Eriksen now gone, Tottenham have a little bit of cash to play around with.

Their priority is to sign a striker reinforcement to help in the absence of Harry Kane, but Tuttosport in Italy believe José Mourinho wouldn’t mind a new midfielder as well.

The man Spurs are thinking about late on in the transfer window is reportedly Emre Can, and the Italian newspaper claim the German would be ‘perfect’ for what the Portuguese manager wants: strength and intensity.

With that in mind, it’s no surprise to then read that Tottenham have ‘already made an enquiry’ to have the midfielder on loan. 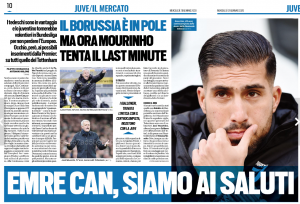 Seeing as there is very little time left in the transfer window, Daniel Levy and co. will have to move quickly if they want to sign Can, especially with Borussia Dortmund seen as heavy favourites to save him from his Juventus and Maurizio Sarri nightmare.

The former Liverpool player has made just eight appearances in the league this season, starting just two of them and totalling a mere 279 minutes of football.