Knocked out of the Europa League by Dinamo Zagreb and sixth in the Premier League behind the likes of West Ham and Leicester City, José Mourinho’s Tottenham aren’t having a season to remember.

The seesawing of results has left many fans wanting more, and there have been numerous stories suggesting Daniel Levy could end up looking elsewhere when it comes to taking Spurs forward.

While Mourinho was given a platform seemingly set up for the long run, results (or lack thereof) change matters quickly in football, which is why the name of Julian Nagelsmann keeps popping up.

Funnily enough, it’s not coming out of Germany for once, but Tuesday sees Corriere dello Sport, when looking at where Max Allegri could land, give some insight into the Tottenham manager’s situation.

They state that while AS Roma, who could make a move for the former Juventus man to replace Paulo Fonseca, ‘would have preferred Nagelsmann’, the option has now been ‘overtaken’. 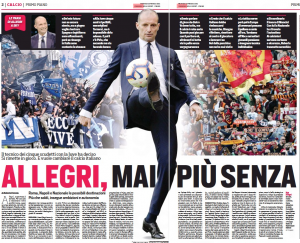 That’s because both Bayern Munich (should they part ways with Hansi Flick for some unknown reason) and Tottenham are keeping tabs on him.

It’s explicitly stated this would be for the ‘post-Mourinho (immediately)’, as the ‘former Special One has played all his credits, and with debts, a coach doesn’t survive’.

We’ll have to wait and see about that, because the ex-Manchester United boss has been in this position many times before, but, just like a cockroach (we mean that in the nicest possible way), he crawls back out of his hole and lives to fight another day.

Southampton and Watford ‘positioned to recruit’ player – Must battle with...