Saved from AFC Bournemouth by Manchester City following his former club’s relegation to the Championship, Nathan Aké was meant to be a big part of Pep Guardiola’s plans.

However, a hamstring injury kept the Dutchman out of action for most of the campaign, which allowed Aymeric Laporte and Rúben Dias to form a mighty partnership at the heart of the Premier League club’s defence.

Now back from his troubles, Aké has played a couple of times in the league against Leeds and Crystal Palace, but has, overall, only managed 11 appearances in all competitions for Manchester City.

Having spent £40m on him, the soon-to-be champions will want to see if next season can go a bit smoother, although one man could scupper that plan.

That person is José Mourinho, recently announced as the new AS Roma manager from next season onwards. 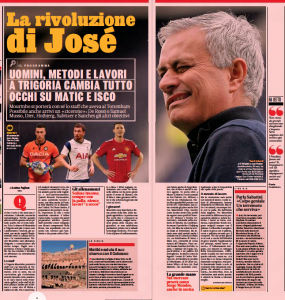 According to Gazzetta dello Sport, Aké is one of the players the Portuguese manager he ‘likes’ for the centre-back role, where he would ideally want someone brought in to tighten up a rather leaky defence.

There’s no indication of how feasible this is, but should Manchester City feel they can cut their losses at a reasonable price, it might be something worth exploring.

In all honesty, a loan deal would be likelier due to Roma’s current finances, but it’s one we’ll definitely be keeping an eye on going forward.