Jose Mourinho isn’t having the best of times right now, with his Tottenham side dishing up poor football and not getting the results which would make that more acceptable.

He’s dropped into a familiar routine which sees him blame others for the situation, and previously that’s been the start of a long and troubled exit from clubs.

During his time with Real Madrid, Mourinho grew increasingly hostile and that’s largely how he’s remembered by the Spanish side and the media close to it. He had arguments with players, ostracised Iker Casillas, and encouraged an ongoing war with reporters.

At times since his exit, there’s been rumours of a potential return, however, it’s always been with the idea of the current Spurs boss cracking a whip and teaching stars a lesson.

Thursday’s edition of AS brings something positive which Mourinho left at Real Madrid… and that’s is Luka Modric. 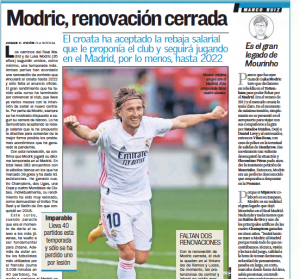 Snatching the player from Tottenham is labelled the manager’s ‘great legacy’ at Los Blancos. Now 35-years-of-age, the Croatian is expected to sign a further extension to his contract at the club.

AS look back to when Modric went AWOL at Tottenham, in order to force Daniel Levy to sell him. That action is now seen as ‘brave’, and the transfer as the lasting impact Mourinho had at Real Madrid.