Arsenal sacked Unai Emery on November 29th and less than a month later, Mikel Arteta was appointed as permanent manager at the Emirates.

Arteta’s arrival has helped the Gunners and even though results haven’t improved a lot, there have been positive signs with the north London club’s playing style.

However, Arteta’s appointment has not gone well for Dani Ceballos, who is at Arsenal on a season-long loan deal from Real Madrid.

The midfielder picked up an injury in November and while he was on the sidelines, the managerial changes took place at the English club. He has made only one appearance under Arteta’s guidance and that came in his side’s 2-1 win over AFC Bournemouth.

Wednesday’s edition of AS takes a look at Real Madrid players currently out on loan. 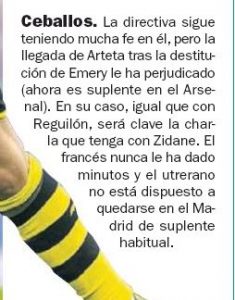 Despite that, the La Liga side’s board still have faith in the Spain international. Despite that, Ceballos doesn’t want to continue at Real Madrid if he ends up being a substitute next season.

First, he needs to concentrate on not being a substitute this season.