They’ve put out a story saying that despite the many rumours, there are only three clubs speaking to the player’s entourage at the moment: Everton, AS Monaco and Inter Milan.

Each club has their interest detailed, and the Toffees, who are described as the ‘most recent’ competitors in the race, seem like the strongest as well.

A Bola claims that William’s agent, Pere Guardiola, has ‘very good connections’ among English clubs, and has recently been in Liverpool to speak to Everton about their interest. 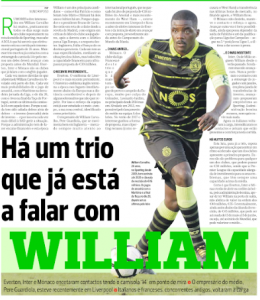 Regarding Monaco and Inter Milan, these clubs have been keen in the past, and have recently communicated that the chase continues.

The newspaper writes that bids in the summer should be of over €30m, with Premier League clubs always expected to have a bigger budget.

But to guarantee the signing, around €40m will be needed.

This sounds exciting from an Everton perspective, but William has been strongly linked to so many English clubs it can get tiring.

That’s not to dismiss the claims of Everton interest, a lot of the claims of clubs being keen have felt true, but Sporting are so hard to deal with that things can so easily fall to pieces.