Víctor Camarasa is looking forward to kickstarting his career at Real Betis, and he’s fortunate that new manager Manuel Pellegrini is a fan.

Camarasa signed for the Seville club in 2017 from Levante, but was unable to impress for them during his first season. That led to him being loaned out to Cardiff City the following season, and when they were relegated he went on loan to Crystal Palace.

The loan didn’t last the full season, with him then joining Alaves, again on loan, in January 2020. Now he’s back at Betis, and in an interview with Spanish newspaper AS has explained Pellegrini was interested when manager at West Ham.

Asked if he spoke to the manager directly, Camarasa explained the situation: “While in Wales (whilst on loan at Cardiff) I did not have the opportunity to speak with him, but people close to him did and although there was no offer, there were contacts with West Ham. You just have to look at Pellegrini’s career, he has done a lot of good things in football.” 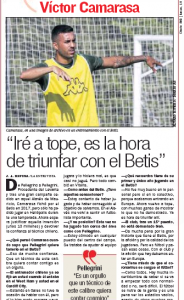 The midfielder didn’t explain why a transfer to the Hammers failed, but it was likely due to Cardiff not wanting to give up their loan player midway through the season and in a battle against relegation.

All that’s concerning Camarasa now is imposing himself at Real Betis and sticking with the club long term, rather than facing any further loan moves.