Sevilla’s Joan Jordán is ‘on the agenda’ of Arsenal for the summer transfer window.

That’s what Marca on Tuesday are reporting, and they also provide an update on the possibility of the midfielder leaving the La Liga side.

Sevilla signed the 26-year-old from Eibar in 2019 when sporting director Monchi returned to the club.

According to the report, the Catalan’s signing has been one of Monchi’s great successes at the Nervión club as he has become one of ‘untouchables’ under Julen Lopetegui in the last two seasons.

Jordán’s form and growth with the Spanish club has seen him end up on the agenda of ‘important clubs’, such as the Gunners.

Mikel Arteta’s side may find it hard to bring the player to the Emirates for various reasons. Despite receiving offers, Jordán’s desire is to continue with his current employer, where he still has a contract until 2023. His current market value is set at €60m, due to his clause.

He has also made it clear on more than one occasion that his desire is to ‘continuing to grow’ at Sevilla. Monchi wants to extend the midfielder’s contract by a further year. 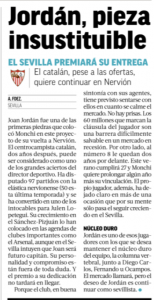 Sevilla want to reward the Spaniard with a new contract, and they plan to sit down with his representatives ‘as the market calms down’. For now, there’s ‘no rush’.

Jordán’s desire is to continue with Sevilla and Lopetegui’s side are planning to offer him an extension.

These two factors, coupled with the €60m fee, make it complicated for Arsenal to sign him this summer.