This morning, we covered newspaper A Bola breaking the news about Andraz Sporar’s transfer to Middlesbrough, claiming the signing was ‘practically closed’.

It’s been said that the striker is moving on a one-year loan, with Boro paying for his salary, and the deal would become permanent in case some objectives were reached.

Now it looks like the transfer is indeed happening soon, with a couple more Portuguese outlets now reporting it as well.

Starting with newspaper O Jogo, they say Sporar’s future ‘should be solved in the coming days’ with the loan to Middlesbrough, who’d been following him for a while.

They take claims from TVI24 to say the Championship side will have an obligatory purchase clause of €8.5m in case the striker scores at least 15 goals and the club are promoted to the Premier League. 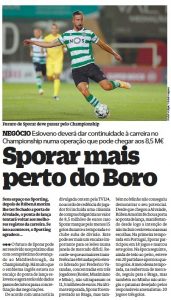 Meanwhile, newspaper Record brings a bigger and stronger story, claiming that the transfer could be concluded today.

They report that same bid as the others, claiming that ‘besides serving the interest from both clubs’, the offer pleases the player as well, since he’s been guaranteed that he’ll have a starting place at Middlesbrough.

Record writes that Boro want to close the deal ‘as soon as possible’, due to the eagerness ‘from the English to guarantee a reinforcement for attack’.

Sporar had been loaned to Braga last season and isn’t in Sporting’s plans for the future. That’s why the club are happy with this deal, and while the 27-year-old trains on his own, he waits ‘for the call to travel to England’.