Home Championship Middlesbrough player suggested as ‘cheap option’ for club, which is a strange...
SHARE

Portuguese side Sporting continue working to sign a new right-back, and as reported by A Bola, they seem close to getting Stefan Ristovski from HNK Rijeka.

This should mean that they’re giving up on Fabio da Silva from Middlesbrough, with the newspaper sharing a few details on that particular idea.

They claim the Brazilian was ‘suggested’, which sounds more like offered, as a ‘cheap offer’ for the Lisbon club. They don’t mention how much would Sporting have to pay for the transfer, although recent reports said the club would expect the player to break his contract with Middlesbrough and move for free.

A Bola claim Fabio isn’t keen on playing the Championship, and say his salary is €800k per season, an amount which could be too high for Sporting.

It’s interesting to see Fabio described as a cheap option this time, because a few weeks ago, after he was offered to Cruzeiro, the Brazilian club said 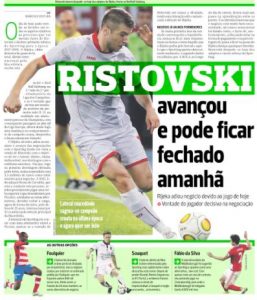 Middlesbrough were not keen on letting him go.

It seems pretty clear that Fabio wants to leave Middlesbrough after relegation to the Championship, or his agents are of that opinion. But with his Boro contract running until 2018, the club can obviously demand a fee instead of letting him just walk, so he’s not going to be cheap.