Following the loan spell Andraz Sporar had at Middlesbrough this season, he could’ve been bought by the Championship side for a fee worth €8.5m.

The agreement between Boro and Sporting said there was an option for a permanent transfer with that amount, which would automatically be triggered in case of promotion to the Premier League, which never happened

Sporar returned to the Lions, where he’s not part of Ruben Amorim’s plans for the next season, and according to Jornal de Notícias, the Lisbon side are putting up for sale for a reduced fee this summer.

It’s said Sporting ‘have set transfer price’ of €6m to let Sporar go. There are apparently no clubs interested yet, so they’re basically just waiting for someone to show up and pay that amount. 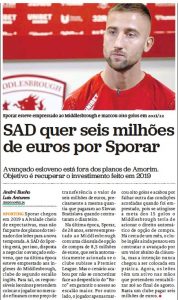 Jornal de Notícias recalls that a month ago, Middlesbrough ‘thought’ of signing Sporar for an amount beneath that agreed fee.

Still, they never really took action for his.

Now that the player is indeed available with a discount, perhaps that’s a good chance for Boro to show up and get him for €6m, or even try to negotiate for less.

In his season at Middlesbrough, Sporar had eight goals and two assists in 37 appearances.