Home Championship Middlesbrough in battle for Serie A striker – Only one other competitor...
SHARE

Middlesbrough are one of the clubs in the race for Cagliari striker Alberto Cerri, the Italian media says.

Tutto Mercato Web writes that the Championship side are one of those who’ like’ the player, along with Como.

Cagliari seem keen on selling Cerri, and the website claims that the 25-year-old should end up moving to one of those two clubs mentioned in the battle.

The outlet doesn’t bring any information on how the talks are going, who is closest to the signing or how much the striker would cost. They just make it clear that either Middlesbrough or Como are about to land him.

Cerri made 26 appearances for Cagliari last season, but in most of those games he was only brought on for the final minutes. That’s probably the main reason why he only scored two goals, one in Serie A and another in the Italian cup.

He’s currently valued by Transfermarkt at €1.5m, so even though Cagliari spent €9m to sign him from Juventus a couple of years ago, they certainly must sell him for a lot less now. 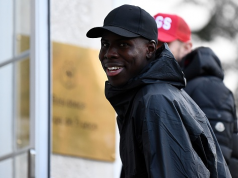