If there was going to be a good, or least worst, time for Alexander Sorloth to get injured this season, then the weekend just gone was it.

The Crystal Palace owned 23 year old was sent on loan to Gent for the second half of the season, having failed to make enough of an impact since his move to English football.

It was no surprise that this route was eventually chosen. The jump for Sorloth from FC Midtjylland to the Premier League was a big one, and many in Scandinavia were both surprised that Palace signed him and at the price they paid.

He’s been getting some game time in Belgium and it’s gone reasonably well, if not well enough to suggest he has a meaningful role at Crystal Palace next season.

Playing against Anderlecht at the weekend, he picked up an injury in the first half, and initially there were worries he may have broken an ankle. Taken straight to hospital for tests, it was revealed there was ligament damage, and no break, report HLN. 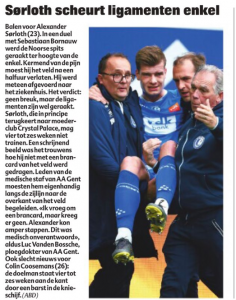 That leaves him out of any training for the next few weeks, but then he wouldn’t have been doing much anyway, given the season has come to an end.

There was some controversy around the injury. Gent’s medical team asked for a stretcher to be brought to the pitch, and in the absence of one arriving, they had to carry Sorloth off.

Luc Vanden Bossche, the club’s doctor, is quoted as saying: “I asked for a stretcher, but I couldn’t get one. Alexander could barely walk. This was medically irresponsible.”