Arriving from KAA Gent in the summer for £5m, Laurent Depoitre’s first season at Porto has been anything but a success.

The Belgian striker was impressive with the Jupiler Pro League side, to such an extent that teams like Tottenham and co. were reported as scouting him at games, yet a move to a big Premier League club never materialised, with the most concrete interest coming from Norwich City.

The Canaries, now managed by Alan Irvine, were looking for a new striker, and made an approach for Depoitre. 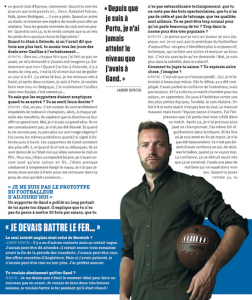 However, when the offer to join a Champions League playing side came along, the striker couldn’t refuse, and Norwich had to settle for Portuguese striker Nelson Oliveira from Benfica instead.

While Oliveira hasn’t exactly set the Championship alight, he has had a better season than Depoitre, who only has one league goal to his name from seven appearances.

Speaking to So/Foot Magazine, the 28-year-old explained his decision to reject a move to England.

He said: “There were other contacts (than Norwich), but it was vague. Maybe I should’ve waited, there was still three weeks left in the transfer window. I might have received other offers from England, but had I waited, maybe I wouldn’t have got anything. I preferred to make sure.”

By the sound of things, the prospect of going from playing in the Champions League with Gent to the Championship with Norwich didn’t exactly grab Depoitre last summer.

Wanting to leave Belgium while he was in great form, perhaps a move to Carrow Road would have served him better than sitting on Porto’s bench this season, watching 19-year-old André Silva enjoy all the glory.

Hindsight is a wonderful thing, after all.