Seen as a mistake by a vast chunk of the Leeds fanbase, selling Ronaldo Vieira to Sampdoria might have brought in much needed cash, but, in the process, Marcelo Bielsa lost a potential future star.

The Argentine manager wasn’t exactly for the sale of the young midfielder, but needs must, and it’s the Serie A club who are reaping the benefits, as the 20-year-old is finally showing signs of why the Italians decided to spend €7m or so on the youngster.

Starting his first game of the season in the league against Roma, which Sampdoria ended up losing 4-1, Vieira was the best player on the pitch for his team.

There was some foreshadowing to all this, as his manager, Marco Giampaolo, prior to the previous game against Torino, said, relayed by Gazzetta dello Sport: “I see he’s ready. I hope he’ll soon start.” 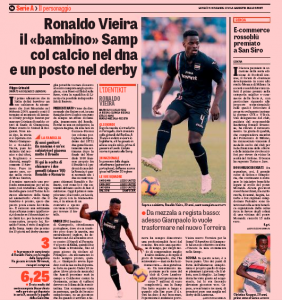 And start he did.

Gazzetta look into the former Leeds United midfielder’s past, and it should be no surprise he’s so good at football, seeing as his mother used to be a professional footballer, and both of her sons, twins, born after the 1998 World Cup final, are called Ronaldo and Romario.

Both contracted to Elland Road from 2015 onwards, Romario is now without a club, while his brother is shining in Italy.

As Gazzetta put it, ‘it was only a matter of time’ before Ronaldo Vieira made the leap into the first team after needing some time to adjust to his new environment.

Fielded as a defensive midfielder, there’s hope he could fill the boots of the departed Lucas Torreira, but that’s not what he has in mind.

All he wants to do, after leaving Leeds, is ‘win my Sampdoria gamble’.