Following his break after France’s elimination from the Euros, Real Madrid star Raphaël Varane is set to return to pre-season training this week.

Manchester United are keen to sign the defender who has entered his final year of his contract and so far, is not convinced with the renewal proposal made by the La Liga side.

Mundo Deportivo have taken a look at those Real Madrid players whose future remains ‘uncertain’ and that’s when the 28-year-old gets a mention.

As things stand, the newspaper states the centre-back’s future is ‘more and more outside the club’.

The Red Devils’ interest is highlighted and in a short update, it’s claimed the former Lens 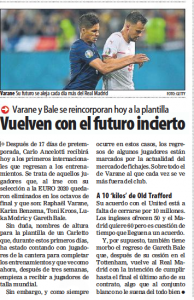 man and Ole Gunnar Solskjaer ‘s side have yet to reach an agreement over a €10m per season contract.

Carlo Ancelotti’s side, for their part, ‘want’ €60m for the France international, but the Old Trafford club have offered €50m.

Despite this, Mundo explain ‘it is just a matter of time’ before Real Madrid and United ‘reach an agreement’ for Varane’s transfer.