Mario Hermoso being called up for the Spain squad has of course seen his profile immediately rise within the country’s media.

The defender has been enjoying a good season for Espanyol and has seen that rewarded by Luis Enrique, a national team manager who appears determined to shake up the Spain squad as much as reasonably possible.

This has all led to Marca having the player on their Friday front page and talking about Real Madrid interest for a possible January transfer.

But there’s thought to be serious competition.

The Spanish newspaper explains Arsenal are one of the more ‘insisting’ clubs when it comes to Hermoso, and they’ve watched several games of his so far. 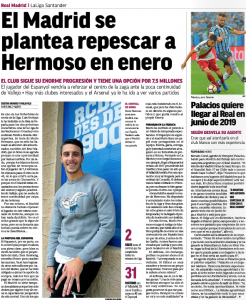 On top of that, it’s stated that Arsenal manager Unai Emery ‘likes him very much’.

When Real Madrid sold the player to Espanyol in 2017, they negotiated a clause which gives them a big advantage should they wish to bring him back.

That could be a big problem for Arsenal interest.