With Hull City currently sitting two points above the relegation zone, there is no doubt that Marco Silva has done an outstanding job since taking over from Mike Phelan.

Handed the job with some disbelieving he had the CV required to manage a Premier League team, the Portuguese manager has proven an excellent choice, lifting the Tigers from relegation abyss to top-flight hope.

This turnaround, unsurprisingly, hasn’t gone unnoticed around Europe, with bigger clubs starting to take an interest in the 39-year-old’s abilities.

The Portuguese media suggested a few days ago the Hull City manager could end up at a Champions League club next year, and the Italian media are now claiming he is a target for Inter Milan. 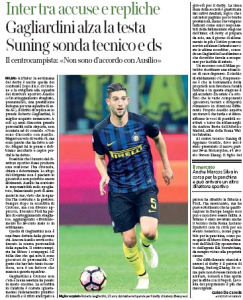 Yet to confirm whether Andrea Pioli will be their manager next season, failure to qualify for Europe would see the Serie A club once again perform a managerial change, with Luciano Spalletti and Marco Silva on the list of potential replacements, as reported by Corriere della Serra on Wednesday.

The reason behind this link is Kia Joorabchian, who ‘sponsors’ the Hull City manager, as well as being strong acquaintances with the Suning Group, Inter Milan’s current owners.

Now that the link has been found, and two plus two obviously equals five in the world of transfer rumours, we fully expect this to become a recurring story in the coming weeks as long as Marco Silva continues to lead Hull City further away from the relegation zone.