On August 8th, we covered a report from Marca, who claimed Cardiff City are trying to convince Real Betis midfielder Víctor Camarasa to join them ‘by all means’.

Today’s edition of the same newspaper now claims the 24-year-old is set to join Neil Warnock’s side on a season-long loan deal after the Welsh club convinced the player that a move to the Cardiff City Stadium is best for his progression.

He has already rejected an opportunity to join Celta Vigo. Now, Betis are willing to allow him to leave as they see the loan move to the newly promoted Premier League club with good eyes. 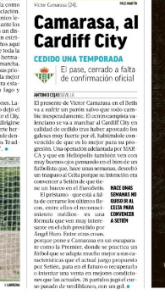 For Cardiff to complete Camarasa’s loan move, a few other final details are left to do and also the player’s medical is pending. Marca claims the Premier League is best suited for his characteristics.

If he impresses while on loan at Cardiff, it will give the La Liga outfit an opportunity to sell him for a higher price next summer.