On Friday, AS Roma announced that Monchi had left the Italian club, and there were immediately claims of an imminent move to Arsenal.

The former Sevilla man has been linked with the Gunners for some time, and Friday afternoon saw claims from both England and Spain that Monchi could be announced as an Arsenal recruit soon.

Saturday’s edition of Marca suggests it may take longer than some expect, and will ‘probably not bear fruit until this summer’.

They do state that Monchi and Unai Emery would be keen to work together again, as they did so successfully at Sevilla, and there’s been a ‘good offer’ from Arsenal, but the immediacy of the situation is being calmed somewhat. 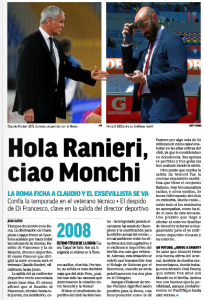 The Spanish newspaper explain Monchi wasn’t happy with the huge media glare at Roma. It’s pointed out that the Serie A club have radio shows and other media channels which cover them 24 hours a day and the pressure got to the Spaniard and his family.

Arsenal have similar, and it’s unlikely he’d find things much easier in terms of media coverage.