Manuel Locatelli is keen on joining Juventus this summer, but the Turin club are facing difficulties finding an agreement with Sassuolo.

On Thursday, Sassuolo chief Giovanni Carnevali revealed that Juve and Arsenal are joined by “another English club” in the race to sign midfielder.

Juventus interest in the Euro 2020 winner has been reported for several weeks and a deal hasn’t been concluded so far because Atalanta are demanding €40m to let the player leave the club this summer.

The newspaper points out that Sassuolo have received a ‘mega offer’ from England and follow it up by saying that ‘many clues lead to Liverpool’.

With the Reds now dragged into the picture, Gazzetta asks whether the player prefers Jürgen Klopp or Massimiliano Allegri. 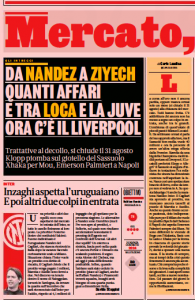 Elsewhere in Italy, it’s been suggested that Tottenham Hotspur are the unnamed English club.

There seems to be a lot of guesswork going on, and don’t be surprised if Manchester United, Chelsea or Manchester City are linked to Locatelli later in the day.