Home Europe Manchester United and West Ham tussling over German – Have him ‘on...
SHARE

Manchester United and West Ham United both have Eintracht Frankfurt’s Director of Football, Fredi Bobic, on a shortlist of candidates for the role.

That’s according to SportBILD, who cover Bobic’s future today as it looks increasingly likely he will leave Frankfurt this summer.

The German newspaper explains that reports this week about a potential exit for Bobic in the summer are correct, with the 49-year-old having publicly expressed his desire to move on.

That, though, is something those in charge of the club have been aware of for some time and, after trying to convince him to stay with a better salary offer, are resigned to him going.

They have promised not to put any obstacles in his way, including demanding a transfer fee, and so Bobic, who considers his time at the club as completed, is now on the hunt for his next job.

That is very likely to be at Hertha Berlin, with Bobic a fan of the club. He also enjoys a good relationship with their new CEO, Carsten Schmidt.

However, with Bobic’s contract negotiations dragging on, they fell into the background, and other suitors moved into the foreground.

This is where Manchester United and West Ham come in, with SportBILD stating that they both ‘have him on their list’ alongside RB Leipzig. 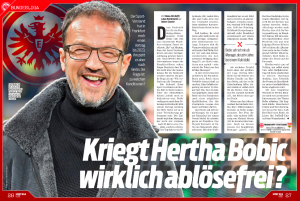 Now there is no mention of contact or even a proposal to the German, just that they both have him on their list of potential candidates, which is a little surprising as neither the Hammers nor the Red Devils are known to be actively searching for a new Director of Football.

In this case, they face frustration, though, with it stated Bobic has put pressure on Frankfurt to sort things out so he can sign his deal with Hertha Berlin.

That would allow both West Ham and Manchester United to ‘tick off the possibility’ of hiring him, suggesting the newspaper doesn’t see him moving to either club this summer.