Saúl Ñíguez has been linked to Manchester United repeatedly in the last few summer transfer windows.

Ahead of this summer, the Red Devils are once again named as a suitor for the Atlético Madrid player.

The midfielder has seen his number of starts reduce in Los Rojiblancos’ title winning campaign, and despite their success in the league, he wants to start a new adventure elsewhere.

That’s according to Marca, who add the 26-year-old has not changed his idea of leaving Atlético. Diego Simeone’s side are ‘forced’ to make an important sale and are seriously considering allowing the Spain international to leave Wanda Metropolitano.

Atlético will not be able to receive a fee anywhere close to his buyout clause, but they need an ‘important amount’ for the midfielder. The La Liga winners’ idea is to sell the star and invest the money on making new additions.

The report’s summary states Ole Gunnar Solskjaer’s side are ‘well placed’ to sign Saúl, but the same isn’t backed up within the report.

Saúl’s market value as per Transfermarkt is €55m, and this is the figure the British press points out United could offer. Juventus also maintain an interest in him. 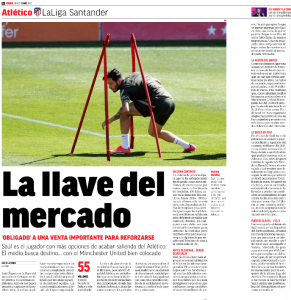 Marca state Manchester United have ‘always been interested’ in Saúl [likely taking into account past reports], which is why they could be his next destination.

At this point, it feels like Marca are relaying what’s been said in England about United, and use it as a base to push Saúl towards Old Trafford, mainly because Atlético need money and the Spaniard is reportedly looking for a way out.